Ever since becoming a foreign-controlled “treaty port” in 19th-century China, Shantou has been open to international trade. When the country began open­ing up in the 1980s, it therefore made sense that this city on the South China Sea, opposite Taiwan, was designated a Special Economic Zone. Yet progress here has been more relaxed and organic than in SEZs such as Shenzhen. Slower development means that traditional
shophouses, three-story brick structures with merchants below and residences above, exist side by side with glass skyscrapers in Shantou’s central district. The relatively low density also means that the COVID-19 outbreak made less of an impact on the population of approximately five million than in the provincial capital, Guangzhou.

In one of those Shantou shophouses is Trongyee, a high-end women’s boutique. Owner Lu Wang had operated the shop for 20 years when she decided that its offerings—predominantly casual wear, shoes, bags, and accessories from various Chinese and international labels—could benefit from a more appealing brand identity overall. So she looked to Peihe Xie, founder and chief designer of AD Architecture, for a renovation.

“To position Trongyee at a higher level,” Xie notes, he developed a concept of evolution, with clever modifications, as opposed to a complete transformation. Certain existing elements, most notably a mezzanine at the rear, have been refreshed not removed. In a sense, it’s similar to the fashion world’s seasonal changes.

Well positioned to attract shoppers, now that they are slowly returning, the boutique presents an open facade to a busy commercial street. The glass storefront, which stretches the full width of the building, does not extend to the maximum possible height, however, creating something of a compressed effect to draw the gaze of passersby deep into the 970-square-foot space. Illumination also plays a part: intentionally dim on the exterior and crisply spotlit on the interior. “As people in Shantou mostly drive, the contrast­ing lighting guides eyes directly in,” Xie says.

The sole bright spot on the facade is the backlit Trongyee logo emblazoned on a rectangular volume that floats above the front door, like a small marquee. Besides serving as signage, the composition alludes to the geometric forms inside. “Curves and angles interweave to enrich the space visually,” the designer continues. “The vaulted ceiling and arched doorways counterbalance all the straight lines.”

Clothing display racks, horizontal bars with equally simple vertical supports, stand against the sidewalls. “The middle of the floor is a flex­ible area that can be used for events,” Xie explains. “Shortly after we handed over the project, Trongyee held its first product launch, for clothing and other accessories by labels including Atelier, Cochains, and Grace Feng.” An arresting focal point amid the openness, a low square slab of rough limestone is intersected by a large disk in brushed stainless steel, slicing halfway across. Functionally, this is a table for showcasing accessories and ma­gazines, but it’s just as much about contrasting forms and materiality.

Euclidean tropes continue with a crescent-shape cash wrap desk that acts as a loose de­marcation point between the main sales floor and the rear of the ground level, under the mezzanine. Here, a waiting area with a sofa is thoughtfully positioned outside the row of three fitting rooms, each entered via an arched doorway. Farthest back on the main sales floor are the restroom and the staff pantry.

Xie splashed the rear staircase up to the mez­zanine—home to a sales salon and an office—with a dramatic shade of red. Coating the steps and walls, it seems to emit a pink aura, thanks to light bouncing off the unusual ceiling treatment. Because of the limited headroom under the mezzanine, just 7 feet 3 inches, he camouflaged the surface with wavy mirror-polished stainless steel. “The rippling patterns both expand and blur the boundaries of the space,” Xie notes.

The red is micro-cement, the same finish found, in shades of gray, dominating the rest of the boutique. Standing out against the monochromatic floors, walls, and ceiling vault, the red and mirrored surfaces produce intriguing shimmers and halo effects that come alive as they reflect the movement of shoppers.

Although those shoppers have been scarce of late, Xie is optimistic. As the slowdown ends, longtime Trongyee customers may be itching to get out and heed the message in the boutique’s name. It translates roughly as: Beautify yourself through clothing.

罐头的英文Read next: AD Architecture: 2018 Best of Year Winner for Firm's Own Office罐头的英文 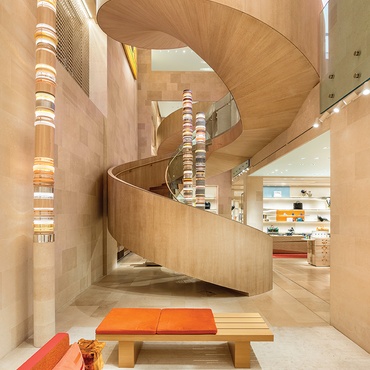 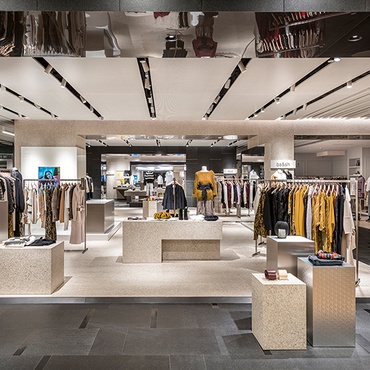 Rose Ointment Inspires LADO’s Design for Benam?r Boutique in Lisbon
Solid pine shelving displays vintage ads for the products, printed in magazines and newspapers during the first half of the ... 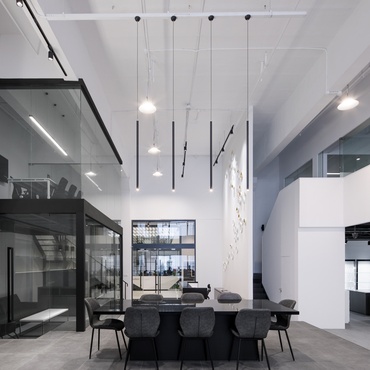 Quarta & Armando Creates Multifunctional Shanghai Space
Seeposh pendants hang above a bar and custom table with Senchuan dining chairs. Photography by Peter Dixie/LOTAN. When does an ...

3 International Concept Stores Bring the Drama
These three concept stores around the globe bring their own unique flavors to the table. Photography by CreatAR Images. Firm: Wutopia ... 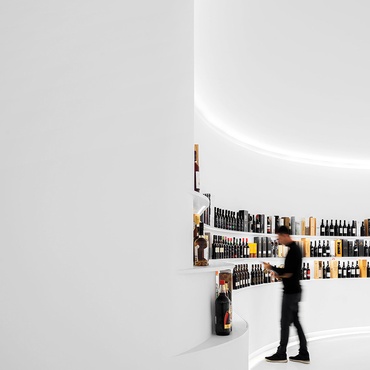 罐头的英文Online Company Portugal Vineyards Launches First Shop in Porto
Until recently, those in the market for port, Madeira, muscat, or vinho verde had to use a computer to visit ... 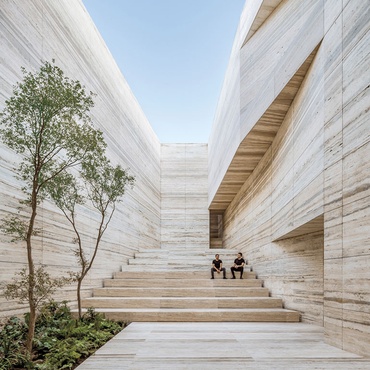 Grupo Arca by Esrawe Studio: 2019 Best of Year Winner for Showroom
Wood flooring from France, Italian-fabricated engineered stone, exotic natural stone from around the globe. Offering these in showrooms around Mexico, ...

New in China: 15 Visually Captivating Projects
To celebrate the Chinese New Year—today marks the start of the Year of the Rat—we’re highlighting the innovative, eye-catching design taking ... 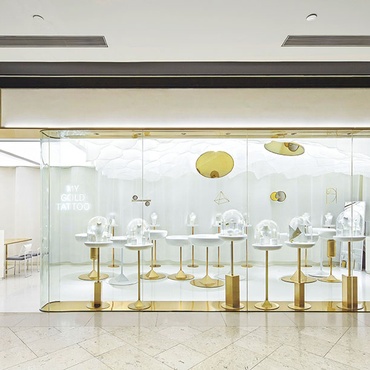 YIN by ODD: 2019 Best of Year Winner for Accessories Retail
Marketing its delicate necklaces, earrings, bracelets, and rings, all in 18-karat gold, to the professional “gentlewoman,” fledgling company YIN Fine ... 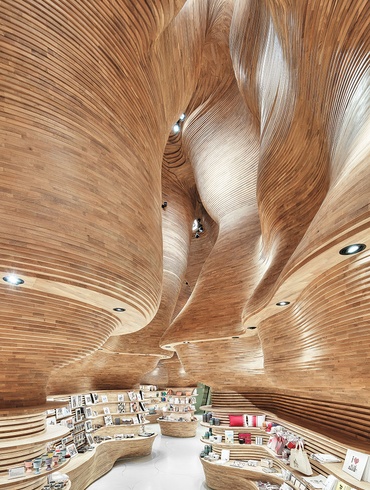 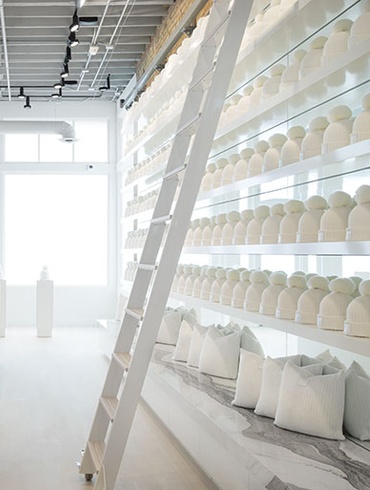